It’s a pleasure to discover a band just by chance and with a great record. Satisfaction even, when you can say to your mates, great record by the Ladybug Transistor and they say “who?, never heard of them” and that would have been me less than 24 hours ago. Now I am even a bit smug, if sixteen years too late.

Thanks to the record store listening post (Rough Trade Records East) I was able to spend some time being captivated by this lovely record during my lunch break. It came as a bit of shock to learn that this band have been around for sixteen years and ‘Clutching Stems’ is their seventh album!

Formed in 1995 in (where else?) Brooklyn, the band seems to have had a stable (Gary Olson) yet at times, shifting personnel, they also suffered the tragic death of a band member. The band is recorded as being part of the Elephant Six Collective, who can count the likes of Jeff Mangum, Apples In Stereo and The Essex Green amongst their ranks. In 2006 the band contributed to the recording of Kevin Ayers' album ‘The Unfairground’ which Gary Olson also produced.

Back to the album, what so hooked me was the melodies, the lyrics and the stories. Main man Gary Olson is centre stage on the record. violinist and bassist Julia Rydholm and Kyle Forester (Crystal Stilts) are joined by, Mark Dzula (The Magic Caravan, Jukebox Radio), Eric Farber (The Lisps), and Michael O’Neill (MEN)

First impression was this was of potentially another National (without even knowing the came from Brooklyn), certainly lyric wise. A sustained couple of listens, puts me more in mind of a Brooklyn, Hefner.

So there is a lot to explore here. Clutching Stems is released via Merge records and is out now.

Light On The Narrow Gauge

Breaking Up On The Beat 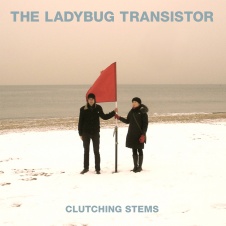 Visit our messageboards to comment on this review, read others, add your own reviews, or  share a new act that you've discovered