Many of you will know Jon Boden from being the recipient of a record number (11 to date fact fans) BBC Radio 2 Folk Awards, a member of folk duo (with Jon Spiers) Spiers & Boden, as creator and performer of the 'Folk Song A Day' website and most famously as band leader of the much missed (and for the record one of the best live bands you're unlikely to ever see again) folk big band Bellowhead.

As if that wasn't enough to keep him out of mischief Jon also has a successful solo career. 'Last Mile Home' follows on from 'Songs From The Floodplain' (2009) and 'Afterglow' (2017) and completes the trilogy about the after-effects of a climate change driven catastrophe.

But don't fret 'Last Mile Home' is not a story of doom and gloom. It s the story of a couple leaving the street carnival of 'Afterglow' and walking from the urban environment of South Yorkshire, through the Lincolnshire Wolds to the North Sea Coast. Throughout the album we hear superb traditional folk music mostly played by Jon with sounds of birdsong and nature coming back to life and hope returning. Let us join the travellers on their journey.

'Old Straight Track' explores the concept of a track being an ancient road leading you along a literal or metaphorical journey through life. We hear birdsong and thoughts of nature returning as “The mockingbirds are singing. The briar is snaking out.... The new sun burns our skin. The winter pallor is receding”, the travellers head on their journey eastwards “...each sunrise shows which path to take.” The musical theme of beautiful guitar melodies and fiddle parts accompanying Jon's rich, mellow vocals continue through the whole album. During 'Into the Garden' nature eventually dominates the post-disaster environment “And the green is like an ocean. And the tide is rising ....Climbing rose and honeysuckle prising...open all the city's pores. And letting in the garden.”

The long and hard journey continues through 'Lay My Body Down', “Why do we keep fighting on ? Why don't we lay our old bones down.” The heat of the journey becomes hard for the travellers as they need to seek shelter in 'Under the Bough' and the gorgeous chorus of 'Honeysuckle Halo'. As Jon says written with the thoughts of the changes which climate change is having on the flora and fauna found in the English countryside. The memories of those who have trod the path before us is revealed in 'Dream Of The Ocean' and 'Come Out Wherever You Are' which features wonderful fiddle and concertina parts dancing a jig around each other.

There's a musical diversion for 'Flash Flood' as the tribal percussion and Middle Eastern feeling to the fiddle parts reflect the heat of the “Red sun, baked earth. Rising through the thick wine of the dream time” the scenery and heat is washed away by a tropical monsoon rain fall “And the tears of the sky fall warm as any blood. Peace turns to drums, dry earth turns to mud.”

The relief of the journey's end echoes the final two tracks with a return to simpler vocal, piano and acoustic guitar parts as the travellers arrive where “ The sunset is behind us. Our shadows in the foreground....On the last mile home.”

A wonderful and moving album which takes us on a journey where hope and a better future are on a track in front of us. An album that's sure to feature in end of year best of listings and looking outside at the first emergence of Spring flowers in the sunshine feels very apt. 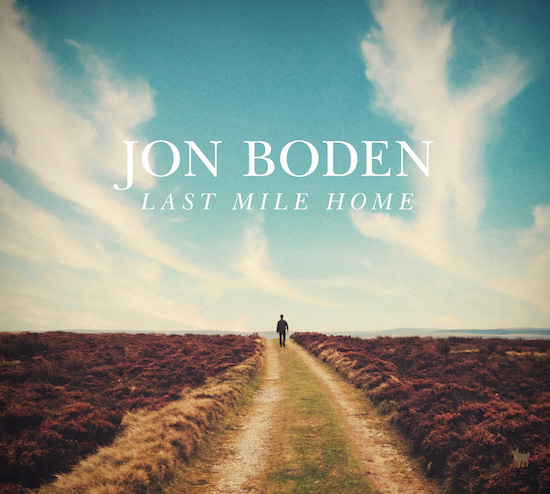 'Last Mile Home' CD and digital formats will be released on Hudson Records on 5th March, and the LP format during April 2021.