For a band bringing out that difficult 12th album in today’s music saturated marketplace , Drive-By Truckers have released a stand-out record with ‘The Unraveling’ via ATO Records.

Co-founding singer/songwriter/guitarists Mike Cooley and Patterson Hood both spent much of the time prior doing battle with deep pools of writer’s block, struggling with how to confront America’s present turmoil through song. My word they have succeeded!

The album starts with ‘Rosemary with a Bible and a Gun’ and what better place to start, with a song title like that. This gentle song leads us into the mighty ‘Armageddon’s Back In Town’ with all guitars blazing and Patterson’s gravel voice at full stretch, “You can't tell the darkness from the flame” ‘Slow Ride Argument’ keeps the pace rocking.

‘Thought’s and Prayers’ brings out the mandolin and some fine Americana that this band are renowned for. “when the shit comes down, I hope I can rise above it” ‘thoughts and prayers’ indeed.

“The past three-and-a-half years were among the most tumultuous our country has ever seen,” says Patterson, “and the duality between the generally positive state of affairs within our band while watching so many things we care about being decimated and destroyed all around us informed the writing of this album to the core. “While a quick glance might imply that we’re picking up where 2016’s 'American Band' album left off, the differences are as telling as the similarities. If the last one was a warning shot hinting at a coming storm, this one was written in the wreckage and aftermath. I’ve always said that all of our records are political but I’ve also said that ‘politics is personal’. With that in mind, this album is especially personal.”

The current Drive-By Truckers line-up, has Patterson Hood and Mike Cooley joined by bassist Matt Patton, keyboardist/multi-instrumentalist Jay Gonzalez, and drummer Brad Morgan – together, they are longest lasting version of the band in the almost 25-years since the band was formed.

The album also features a number of special guests, including The Shins’ Patti King, violinist/string arranger Kyleen King and North Mississippi All-Stars’ Cody Dickinson, who contributes electric washboard to the 'Babies In Cages.' Final track 'Awaiting Resurrection' is a slowburn classic,  over eight minutes long, it almost melts the vinyl!

This really is a record for the times we live in, a band on fire!

Drive-By Truckers will mark 'The Unraveling' with a world tour. The band has confirmed European and UK show for June 2020.

‘The Unraveling’ is released on 31st January and the vinyl is recommended! 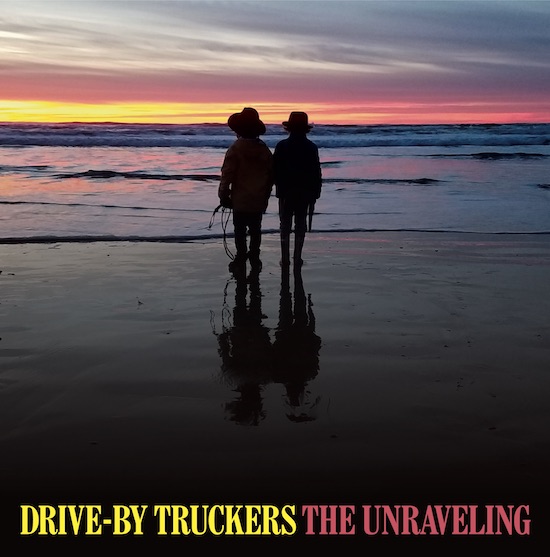