Matt Patershuk - 'If Wishes Were Horses'

Matt Patershuk is a singer/songwriter from La Glace, Alberta, Canada. For a non-driving city dweller like myself that is immediately intriguing. Thanks to Google Earth I was able to explore the roads leading out of this hamlet of 181 inhabitants and all there is is emptiness. Fascinating!

Matt releases music on the Black Hen Music label, which was set up in 1998 by musician and producer Steve Dawson, of the Music Makers And Soul Shakers-podcast fame. Steve has produced Kelly Joe Phelps, Old Man Luedecke and Birds Of Chicago among many others, and he has produced all of Matt's albums. Steve, from Vancouver but now based in Nashville, likes to record with all musicians playing together in his studio. This means albums are recorded quickly and the resulting sound is pretty much perfect, at least judging by 'If Wishes Were Horses'.

Matt Patershuk's fourth album takes its title from a Scottish proverb: "If wishes were horses, beggars would ride", which suggests that if wishing could make things happen, even poor people could have what they wanted: A helpful tactic amidst the austerity of this unequal world, where positive thinking is what keeps a large chunk of the population afloat. It is a theme that comes back in a number of songs.

The protagonist in 'Walking' has lost his woman and walks and walks, still looking for her. When he sees someone that vaguely looks like her he pretends that it is her, walking towards him. This brought Wilko Johnson's autobiography to my mind ('Don't You Leave Me Here') in which he described doing precisely that after losing his wife. The character in 'Alberta Waltz' comes from his day job, sets down his tools and despite feeling sore he takes his partner to an unglamorous tavern, where they dance.

'Velvet Bulldozer' tells the story of bluesman Albert King. Velvet Bulldozer was his nickname because of his smooth singing and large size. His real name was Albert Nelson, however he performed as Albert King, for a while pretending to be B.B. King's brother. Albert held various jobs, including driving a bulldozer, before he was able to become a professional musician. He was a dreamer as well: “I think about my voice on the radio. Man, what would that be like?” The song tells of the juggling act, gigging at night and doing physically hard work during the day. This will have resonated with Matt Patershuk, who is a bridge builder.

The album contains four short instrumental pieces, entitled 'Horse 1' to 'Horse 4'. These are the same melody, given four different treatments: Spaghetti Western, gloomy atmospheric, smooth (with piano) and smoothier (with pedal steel). They are beautiful pieces and I wished that they were longer. They sound as if they could be from a soundtrack.

The album contains one cover; The Grateful Dead's 'Sugaree'. while seeking  out Ithe original I got sucked into a YouTube rabbit hole that revealed cover versions by Gregory Isaacs, Graham Parker, Phosphorescent and best of all by Chris Robinson (check out his fabulous version from 2003 live at the El Rey on YouTube). Matt's 'Sugaree' has a relaxed pace, with lovely instrumentation and backing vocals.

The instrumentation throughout the album is excellent and varied. All the songs contain instrumental sections that sound wonderfully crisp. There is harmonica and whistling on 'Ernest Tubb Has Fuzzy Slippers', piano on 'Sugaree', pedal steel on 'Alberta Waltz', organ on 'Velvet Bulldozer', electric guitar on 'Bear Chase' and violins on 'Last Dance'. I am only mentioning the most prominent instruments here. All of the arrangements as well as the superb musicianship of the band really augment the songs and add to making this such a strong and varied album.

Standout track for me is 'Circus'. Matt's singing is reminiscent of Tom Russell here and the melancholy subject matter is what Tom specialises in. Here a man looking back on his time with a circus and listing all the charms of that life: “It's hard not to fall in love with the big top, where we fire acrobats from great silver guns. Swallow swords and ride horses off of diving boards....” “We had fire in our bellies then, iceblood in our veins, three rings, one full heart. God, those were the days”.

Matt is a great storyteller and if I had to pick one word to describe this album it would be unhurried. Matt does not appear to come over to Europe to play, which is a pity. Perhaps someone should send Bob Harris a copy of this album. Matt's live shows seem to take place exclusively in North America and in particular on the flourishing Canadian folk festival circuit.

Matt's back catalogue and further info can be found on his website And to conclude an excellent clip to get an impression of Matt live. 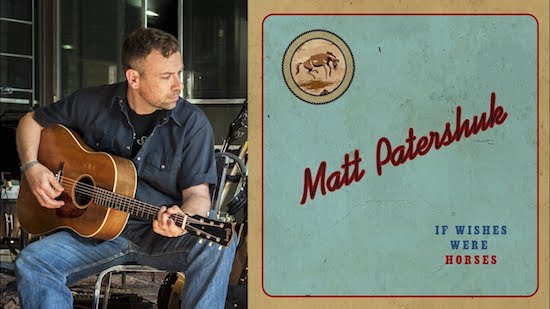